On September 14, 2021 the Minister of Infrastructure, Andrzej Adamczyk, recalled Michał Witkowski from the position of Vice-President of the CAA. Simultaneously, he nominated Andrzej Kotwica and Michał Kozłowski as Acting Vice-Presidents of the CAA.

They will perform their function till the positions are filled as a result of recruitment according to Art. 20, item 3 of the Act of July 3, 2002 – Aviation Law.

Both new Vice-Presidents will keep their positions as Director of Aviation Technical Department and Aerodromes Department, respectively. 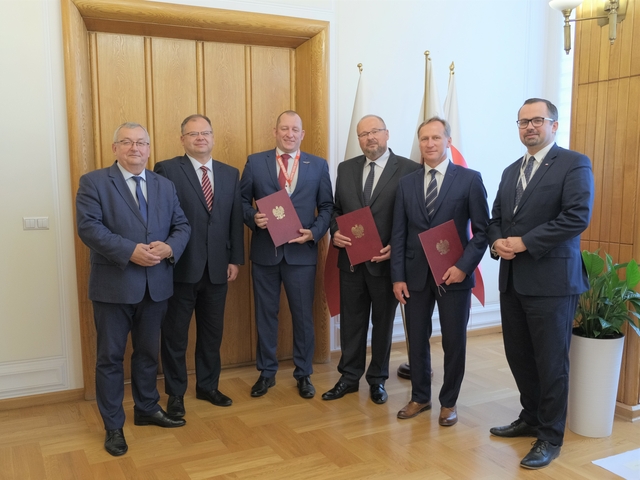 Born on February 3, 1963 in Ostrowiec Świętokrzyski.

He graduated from the Mechanic Faculty at the Military University of Technology, major in airplanes and helicopters. He also graduated from post-graduate studies at the Faculty of Military Aviation and Air Defense at the Academy of National Defense, major in Aviation Management.

After graduating from the Military University of Technology, in 1987 – 2004 he served in the Army, taking various technical positions in the aviation of the armed forces.

He has worked in aviation since 2004 – at that time he started working for the Civil Aviation Authority as airworthiness inspector at the South-East Branch Office of the CAA in Wrocław. He was a member of standardization teams (MAST – Maintenance Standardizations Teams) of the European Union Aviation Safety Agency due to which he participated in standardization audits in Finland, Serbia, Moldova and Turkey.

Privately, he likes downhill skiing and long-distance running – he is a representative of the Wrocław Running Club “Piast”.

He graduated from the Faculty of Transport at the Warsaw University of Technology – major in Aviation Traffic Organization and Management.
He also graduated from post-graduate studies on “Management of a modern company – state enterprise in market economy” – provided by the University of Warsaw and the Skarbek University in Warsaw.


Doctor of technical sciences in the area of transport.

He has worked in aviation since 1992. At that year he started working for “Polish Airports” State Enterprise.
He has a considerable experience in operational management, certification, training, operational supervision, planning and aviation infrastructure designing as well as in analyses and operational and business processes management. He also has a long experience in project management and implementation of modern system solutions within the scope of safety, security, continuity and quality of aerodrome exploitation. Moreover, he is an experienced auditor of integrated management systems.

Participant of numerous courses and trainings in civil aviation, both national and international, provided by institutions such as: IATA Aviation Training and Development Institute, JAA Training Organization and Singapore Civil Aviation Academy.

Since December 2018 – he has been the Director of the Aerodromes Department at the Civil Aviation Authority.

Since 1998 he has cooperated at a scientific and didactic level with the Department of Aviation Transport Engineering at the Faculty of Transport of the Warsaw University of Technology. Author of an academic textbook “Aerodromes – Infrastructure, Exploitation and Management” as well as of a couple of dozen of scientific publications in the area of infrastructure, systems, aerodrome and aviation traffic management processes. Thesis supervisor of numerous dissertations in this area. In 2019 he was awarded an individual award for didactic achievements by the Rector of the Warsaw University of Technology.